Global climatic changes and the need for sustainable travel have pushed the who’s who of the aerospace industry in a mad race to invest heavily in fuel-efficient, sustainable technologies.

Aircraft and engines can now run on 50% SAF, while tests are being conducted to ensure they fly on 100% SAF in the days to come.

Hydrogen technology, as an efficient alternative to aviation fuel, seems to have gained pace, with many players betting big on its viability. Although it seems promising at the moment, some still see it as an unlikely solution for large-scale operations.

Are there even bolder, more innovative projects out there? Sure there is.

And that’s where the Falcon Solar aircraft “flies” in.

A flying craft that can drop fuel altogether, and therefore not require any refuelling stops while still being capable of top-level performance – sounds appealing?

That’s exactly what engineers at the US-Spanish aerospace firm-Skydwelle, have been working on. Solar Impulse solar-powered aircrafts developed by the company, just about give us an insight into the world of possibilities that can be achieved with such concepts.

Laszlo Nemeth of Lasky Design wanted to carry forward this idea and for this, he turned to nature to shape this futuristic solar-powered aircraft-‘Falcon Solar’. Inspired by birds of prey, the streamlined concept features large wings that curve upwards and a pointed cockpit and tail.

Even nowadays, nature’s iteration of shapes can be a good inspiration for design and help development with almost perfectly harmonious proportions such as golden ratio

The design features an advanced set of wings that goes beyond the accepted norms of aircraft design and curves upwards. According to Nemeth, the Falcon Solar airplane can fly with zero-emission thanks to its large wing area that’s equipped with solar panels. The array of solar panels spans across the whole length of the wings which should, theoretically, be able to produce enough energy from the sun when gliding over the clouds.

The design breaks with conventional aircraft design and uses the advantage of flying wings. The shape is unique in that the fuselage also generates significant lift while providing a surface for the solar panels

Apparently, the wings that are curved upwards seem much larger compared to the streamlined body, with a sharp tip.

Rudder and vertical stabilizers are an indispensable part of aircraft construction- they actuate the direction of the aircraft. As can be seen evidently, the Falcon Solar design is void of these essential surface components and that’s what makes this design unique. Furthermore, from the looks of it, the cabin area also seems to be very compact.

Not many details are known about its specifications and how actually it would take to the skies. Though a concept for now, its unique shape and design could inspire many more innovative and sustainable aircraft models for commercial purposes in the not-so-distant future. 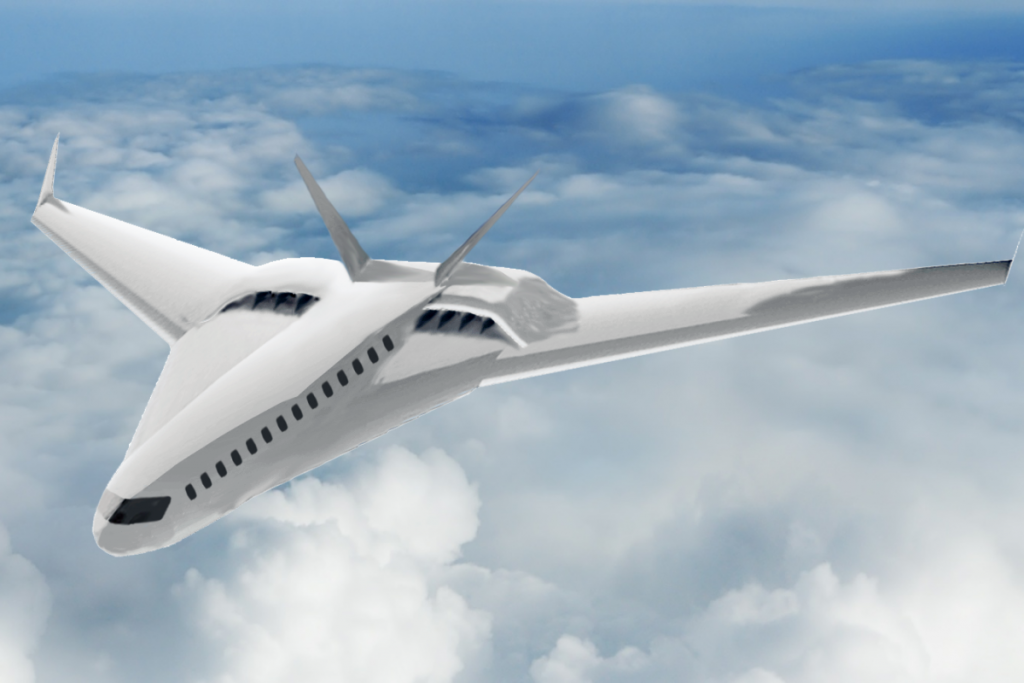