Agartala will be connected with Dhaka and Chittagong cities of Bangladesh through flights, Tripura Chief Minister Biplab Kumar Deb said on Saturday, February 19.

Services along the Agartala-Dhaka and Agartala-Chittagong international routes are expected to begin within the next six months, and the Ministry of Civil Aviation (MoCA) will soon float tenders inviting expression of interest from private airlines wishing to operate along the routes, a senior official said.

“Finally, MBB Airport in Agartala is now set to have an international flight service with Dhaka & Chittagong. My heartfelt thanks to Hon’ble PM Shri @narendramodi Ji & Civil Aviation Minister Shri @JM_Scindia Ji for this initiative to fulfil the dream of the people of Tripura,” Deb tweeted.

“The proposed international flight service with Bangladesh will surely boost Tripura tourism & take the state to a new height in terms of air connectivity. It will also benefit the people of Bangladesh in various ways and strengthen relations between two countries,” he said in another Twitter post.

The MoCA has included the proposed international routes under the UDAN scheme, Sanjoy Mishra, Officer on Special Duty (OSD) to the chief minister said.

“The MoCA will now float tenders inviting expression of interest from private airlines who wish to run their services along the two international routes,” he said.

The international flight services from Maharaja Bir Bikram (MBB) Airport are expected to begin within the next six months as the MoCA has already identified the two routes, he said.

MBB Airport Director Rajiv Kapoor said that the chief minister has taken up with Union Civil Aviation Minister Jyotiraditya Scindia the commencement of international flights from the airport at the earliest.

“Right now, I cannot say when the international flight services will kick-start from the airport but we are ready for it. “The new terminal building, which was virtually inaugurated by Prime Minister Narendra Modi on January 4, has all facilities, from customs to immigration and separate zones for arrival and departure, for handling international passengers,” he said.

According to the officials of the Airport Authority of India, the MBB airport, located 20 km north of Agartala, is the second busiest airport in the northeast after the Guwahati airport in terms of handling of aircraft and passengers. The Guwahati and Manipur airports were earlier declared international airports.

Built at a cost of INR 500 crore and with a built-up area of 30,000 sq mt, the new integrated terminal building at the MBB airport has been designed to handle 1,500 passengers, including 200 international passengers, during peak hours and it is equipped with all modern amenities. 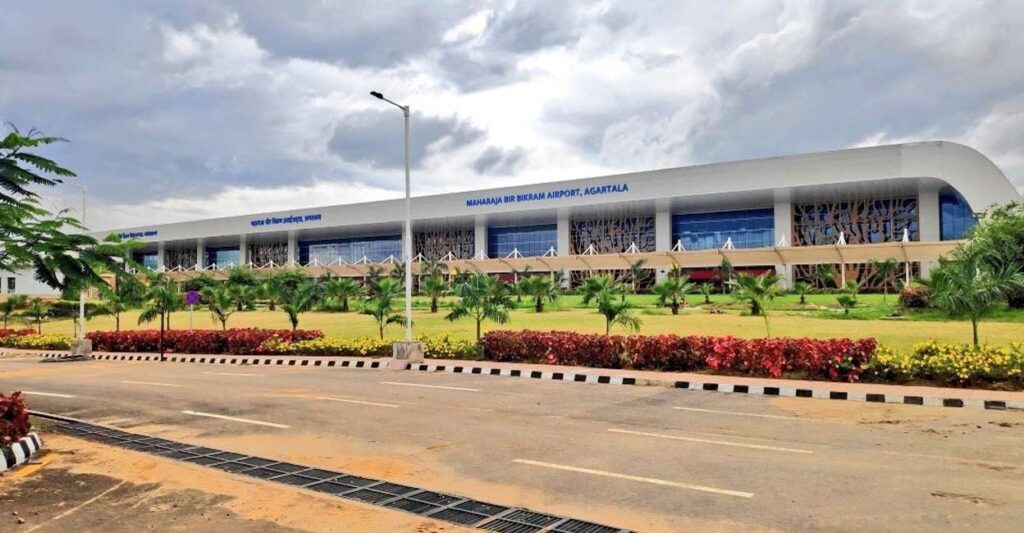 The Airports Authority of India recently declared that in the future, Agartala’s Maharaja Bir Bikram Airport (MBB) will provide flights to Bangkok via Guwahati, as well as Chittagong and Dhaka, Bangladesh. The airport is located 20 kilometres north of Tripura and is the second busiest in India’s northwestern area. After the Guwahati airport in Assam and the Bir Tikendrajit International Airport in Imphal, Manipur, the MBB airport is the third international airport in the northeast. “During the Second World War, King Bir Bikram supported and helped the Allied powers, especially Great Britain. He deployed a…