The Wright Brothers may have been the first to make the first successful flight in the history of a self-propelled, heavier-than-air aircraft, although this time around, it is the Red Bull Air Force members and cousins – Luke Aikins and Andy Farrington – who’s gonna make history.

In what is touted to be the first of its kind in the world and aviation history, the two cousins will attempt to “swap planes” mid-air in a controlled manoeuvre, before moving on to attempt a safe landing.

Here’s what we know.

The feat involves the pilots taking their Cessna and pitching them into a synchronized nosedive at 14,000ft (4,000m) – stop the engines, while a custom-manufactured airbrake will hold the planes in a controlled-descent speed of 140mph (225kph). They will then exit their respective aircraft and cross each other mid-air before skydiving in tandem into each other’s planes, before performing a safe landing. All of these would be performed in under 1 minute for “plane swap”.

History in the making

This will be the first time in history a pilot will take off from one aircraft and land in another.

Aikin, who is an acclaimed skydiver, has undertaken more than 21,000 jumps, is also a commercial aeroplane/helicopter pilot, innovator and coach, and consultant on the legendary 2012 Red Bull Stratos mission.

In 2016, he set a new world record by freefalling from the mid-tropospheric altitude of 25000 ft without Parachute, landing in a carefully constructed 30m x 30m net- this being just one of three world records he holds.

Apparently, the “plane swap” concept was visualized by Aikin, who was inspired by a 1990s photo in an aviation publication.

Comin from a family of skydivers, his cousin-Andy Farrington, was also born to fly. His mum, Jessie, made about 100 jumps with Andy in utero. Andy made his first tandem jump at age 12, went solo at 16, and has since become the king of the skies, having accumulated over 27,000 jumps, 1,000 BASE jumps and 6,000 hours as a pilot.

How did they go about it?

Apparently, hours of research and development went into the modifications required to make this possible.

Dr Paulo Iscol- a world-renowned aeronautical engineer, collaborated with Aikins and Farrington to serve as lead engineer and worked on the issue of how to produce a controlled vertical descent – which is the exact opposite of how autopilot systems are designed to function.

This necessitated the need for reverse engineering of the autopilot mechanics-which resulted in a purpose-built airbrake system installed on the belly hat that would hold the planes at a controlled-descent speed of 225kph (140 mph)- exactly matching the rate of the skydivers’ descent.

Plane Swap is the pinnacle of my career, and my goal is to inspire the world and show that anything is possible. You can set your mind on something that at times seems wild, crazy and unattainable, but through ambition and creativity, you can make it happen 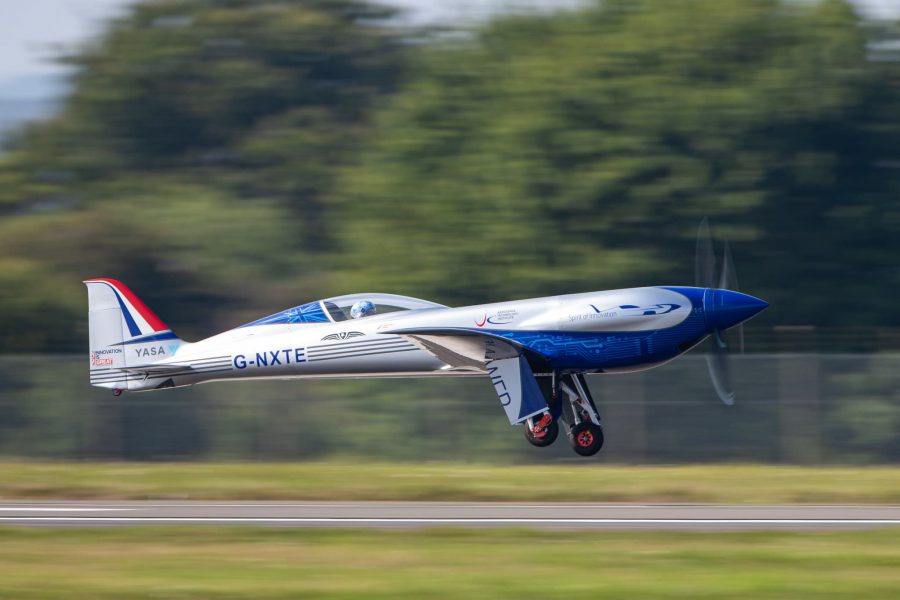 Rolls-Royce has announced that its all-electric ‘Spirit of Innovation’ aircraft is officially the worlds fastest all-electric aircraft, having set two new world records which have…